As he slept, the world ended.  It was a world inside his head, but it looked just like the one he moved through by day: men read the news on television; people of all vocations congregated in the village square; beautiful girls sat cross-legged on stools in ice cream parlors, their lips puckered around straws as if they were waiting to be discovered and cast as femmes fatales in black-and-white movies.  But this world had been given a death sentence: it would be gone in “Five Years.”  Society was crumbling, three-hundred-sixty-five-times-five days away from complete annihilation.  The nature of armageddon was unspecified, in the song at least – perhaps it was articulated in the dream, but Bowie spared us the pain of hearing the diagnosis: the “news guy” explained nothing through his tears save that “earth was really dying,” and you get the sense that for the masses the end was simply a looming shadow, a gathering darkness, creeping chaos that would fray and unshackle the innate bonds and hatreds of society until children were being attacked by adults, law-and-order types submitting to the uncertain faiths of religion, steadfast soldiers contemplating throwing themselves beneath lumbering vehicles to conclude it all before the true end could arrive.  Bowie himself, he tells us, meandered through this madness in a daze.  His head hurt; he felt an overpowering need to be with other people; he walked through the rain and felt like he was in a film, like none of this was real, and he thought about his mother.  He thought about a girl, about the color of her skin and the sound of her voice, about kissing her and reveling in the simple pleasures of watching her move.  He thought about those five years that lay ahead, and about how five years were all that was left, and presumably about how little time that was, and about how much, and about what he might do with it.  And then, we assume, he woke up. END_OF_DOCUMENT_TOKEN_TO_BE_REPLACED 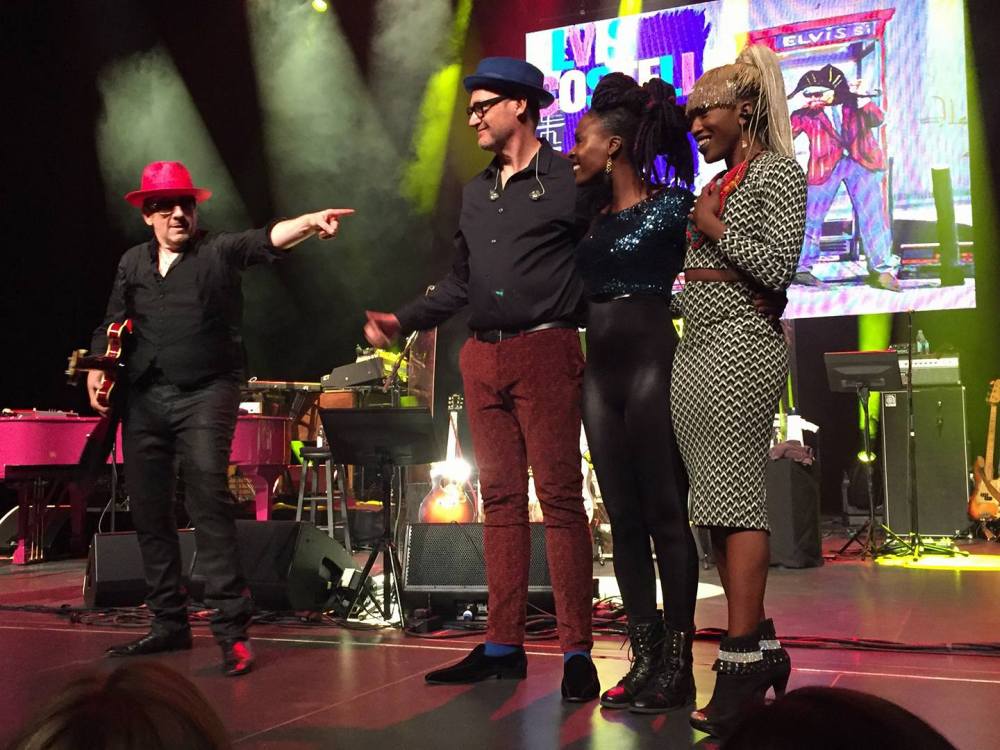 You know the show is over when you hear the children’s song playing on the PA. Elvis Costello and the Imposters have taken their bows and hustled offstage; the houselights have gone up; you’re encouraged to egress likewise by the sweet voice of Mandy Miller filling the room: it’s her 1956 novelty tune, produced by Beatles maestro George Martin, about a pachyderm ankling its big-top gig to rejoin the herd storming through the jungles of Hindustan. The chorus goes:

Nellie the elephant packed her trunk
And said goodbye to the circus
Off she rode with a trumpety-trump
Trump, trump, trump…

In the fall of 2016, in the possible twilight of American democracy, as the world may or may not be dancing on the lip of the abyss, all roads lead here: accidents will happen, to be sure, but Costello knows exactly what he’s doing when he links his customary show-closer, a storming plea for comity in the form of “peace, love, and understanding,” with a warbled valediction offering up the comic image of the symbol of the GOP galumphing into the distance, its clumsy steps conjured onomatopoetically with the last name of Donald Trump.

END_OF_DOCUMENT_TOKEN_TO_BE_REPLACED

It’s either a very good or a very bad week to be an Indians fan. Tonight’s game will vindicate, even as it crushes, longtime and lifelong hopes; I confess I’m not a World Series watcher, or even someone who’s into sports, so I have no stake in whether the Cubs or the Indians wins the thing. I’ll be happy for people I know from Cleveland if Game Seven goes the Indians’ way, but I also know Chicagoans who are fanatics for the Cubs, and I’m happy to be happy for them too. Please don’t be offended that I can’t pretend it matters too much to me.