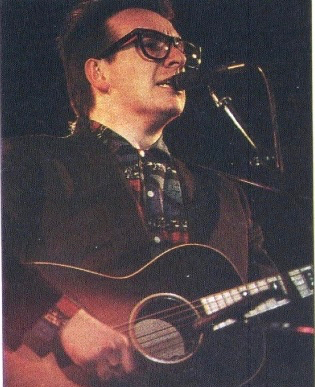 Did you all hear Elvis, the other day, dropping in on Steve Nieve’s daily improv session? What did you think? It’ll come as no surprise to hear I found it pretty wonderful — every day Steve plays us some music is fantastic; this was fantasticker than usual — and if Costello & Nieve feel like gifting us with a new tune, I’m probably not alone in saying I’m there, every time. Still, I couldn’t help feeling there was something strange about it, not bad strange but strange nonetheless. For a few days I’ve been struggling to put my finger on what it is, and funnily enough it took listening to this recording of one of my all-time favorite EC shows, from this day thirty-six years ago, for me to find the fumbling beginnings of a way to articulate it.

Here’s what I realized: one of my favorite things about early-eighties Costello — the Costello of my earliest acquaintance — was, for lack of a better word, the arrogance. The term is usually used negatively, for someone whose confidence is overweening, but in EC’s case his belief in his gifts was always perfectly, precisely weened. He had every right to be arrogant. The man would throw his towering talent at challenges with a seeming absence of concern that it might ever prove overmatched, and indeed it never was; as another great songwriter once wrote, Elvis Costello held mountains in the palm of his hand, and rivers that ran through every day. Could he write a series of songs that stole the “winning formulas” from all the top hits of the day, and seemingly without effort make them even better than their million-selling counterparts? Sure, and he’d call it Trust to boot. Could he borrow the Beatles’ engineer, Geoff Emerick, have him make a record, and still say that this legend’s work was done “from an original idea by Elvis Costello”? Yes, he could, and as Beatlesque as it sounded, with an LP as good as Imperial Bedroom the “original idea” credit didn’t even feel like hubris. Could he add a horn section and the Jam’s backing vocalists for an entire tour, and still make it a deeply original and thrilling nightly musical experience? Just ask 1983.

More to the point, could he tell the Attractions, one of the greatest rock and roll bands of all time, to take a few months off, to stay home and kick back, while he went out and did a solo tour? Moreover, on that solo tour could he play a slew of brand-new songs and relatively obscure covers and still make it utterly riveting, night after night after night? Could he prove a match for a wildly diverse set of songs by a host of songwriters, and also convince people to love new material including a song about Neville Chamberlain, and while he was at it still sell out houses? Yes, he could. Don’t believe me? You be the judge: here’s an early night on that 1984 tour; Elvis does a bunch of stuff that would wind up on Goodbye Cruel World; he covers Prefab Sprout and June Tabor and Charlie Rich and Jerry Dammers and, yes, Bob Dylan, and he throws in a Brendan Behan song for good measure. If you like this stuff, incidentally, it’s well worth picking up the Goodbye Cruel World reissue, which contains the only official releases from this live era and, despite Costello’s famous apologia claiming that disc is his “worst record,” is in the main, and not for nothing, also a pretty staggering collection of songs — albeit ones bogged down by some hopelessly dated production decisions. He would, over the decades, settle into a more accessible persona — without his talent ever diminishing in the least — but what you’ll hear on this recording is a man at the height of his powers, reaching into the skies and grabbing lightning bolts and using them to brush his teeth. Listen, and fall to the floor aghast at his power.

But here’s the thing: if you’re like me, you’ve been spending your quarantine listening to a host of occasional or weekly or even daily musical livestreams. I recommend literally any of them — showing support for your favorite musicians, throwing them a few bucks where you can and a little love even where you can’t, is as close as there is nowadays to an obligation for those of us who love music. It’s comforting, in an era where we can’t go out and hear live performances, to have musicians show up on our computer screens, playing a few tunes from their living rooms to help us pass the time and stay sane. But at the same time there’s something humbling about it, and I don’t mean for us. I mean for them. Have you ever wondered what your favorite rock star’s living room looks like? Here’s your chance to see. Have you asked yourself if a singer you love sounds as good at three in the afternoon as he does at nine o’clock at night? Find out. Do you wonder what someone you’ve only ever seen onstage, the focus of an entire theater’s attention and adoration, looks like when he’s just woken up, and when he hasn’t left his house in two months, and when he depends on neighbors to leave groceries outside his door because he is, completely justifiably, loath to breathe the air outside? Well, just tune in to Elvis Costello’s live broadcast, and discover for yourself.

This is not to say anything negative: I love that EC has some Christmas lights haphazardly strung over a framed photograph in his study, and wears his glasses up on his forehead when he needs to look close at a tiny screen. I love imagining a man who once played to a global Live Aid audience of a billion people sitting and strumming a guitar for no one save his computer, or probably his phone, which he doesn’t seem to understand how to turn off portrait mode. I love that broadband limitations make it difficult for him to play along with his keyboardist, so when he calls into Steve’s show he just has to turn the sound down on his end and ask the other folks to play along with him. I love all of this. And at the same time there’s something small about it — disconcertingly, charmingly so, for Elvis Costello and for everyone who’s streaming nowadays. Everyone you watch on these livestreams, however rich and however famous and however talented, is dealing with the same stuck-inside quarantine tedium and malaise. They’re just trying to keep themselves from losing their minds; they’re asking themselves why they haven’t written that monograph yet, or that novel, or that opera, that they’ve always told themselves they would work on if only they had the time; they’re wondering why they haven’t gotten into the kind of utterly-ripped shape people in movies do, when they’re sent to prison for crimes they didn’t commit. They’re wondering if things are ever going to be normal again, and they’re wondering what normal even looks like. They’re in the same boat you are — yes, even Elvis Costello, who not all that long ago, really, just thirty-six years ago, seemed like he could scale buildings, melt icebergs with his eyes, shruggingly perform a brand-new song like “Inch By Inch” after introducing it as a cover of the Rolling Stones’ “Satisfaction,” and have the crowd eat it up like it’s every bit the equal of that classic song, which of course it is. It’s strange that that’s the case, and while I’ve been vaguely aware of it for weeks now, Steve’s broadcast last week really hammered it home for me.

And all this is to say, I know the same as you do that things will return to… Well, not quite normal, probably, but something like it, or like a new thing that will replace it, and I know it’ll be okay to be arrogant again, provided you possess the gifts to justify it and provided you’re not, say, the president of the United States. We saw the actual living rooms of the Rolling Stones today, and aside from a massive tome of mystery stories on Keith Richards’s coffee table and a palm tree in Ronnie Wood’s atrium, they’re as quotidian as EC’s; someday, though, these giants will be giants again, and back out before adoring crowds where they belong. For now, though, all we can do is remember, mistily, what normal was — and, when we’re in the mood to do so, we can listen to recordings of that wonderful normal of yore, and of what astonishing things brilliant people were able to do in the midst of normality. Some of them could transcend it, with ease and grace. Download this bootleg, and give a listen to one such genius doing exactly that. And hang in there. This will pass. I’m at least half sure of it.